The networks of fjords, bays, and inlets in the Puget Sound has its share of superlative creatures. The many habitats of the Sound serve as a remarkable home for animal and plant life. The Center for Biological Diversity in 2005 recognized about 7,000 species of organisms in Puget Sound basin, including over 4,200 animals, 1,500 plants, 850 fungi, and 30 algae, and it found that more than 950 species were imperiled. The SeaDoc Society reported the following animals in the Salish Sea marine environment alone: 38 mammal species, more than 170 bird species, and more than 260 fish species; they estimate there are more than 3,000 invertebrate species visible without a microscope!! Oh my, there are so many creatures in the Salish Sea ecosystem that we share a home with! 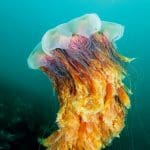 Lion’s Mane JellyfishThe lion’s mane jellyfish is just one of the many extraordinary creatures in Puget Sound. The largest jellyfish in the world, it can reach several feet in diameter and its mass of tentacles can exceed a hundred feet in length. (Photo by Drew Collins) 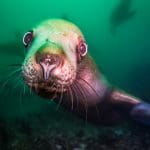 Steller Sea LionSteller sea lions are the largest of the sea lions, with males weighing two thousand pounds on average. These aquatic mammals are commonly found in the northern waters of the Salish Sea. (Photo by Drew Collins) 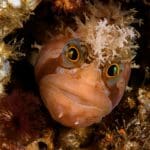 Decorated WarbonnetDecorated warbonnets utilize space under ledges, in cracks in rocks, or inside empty barnacles. It’s one of the many creatures that rely on the Salish Sea’s remarkable diversity of habitats. The marine environment alone hosts 38 mammal species, more than 170 bird species, and more than 260 fish species, according to the SeaDoc Society. (Photo by Brandon Cole) 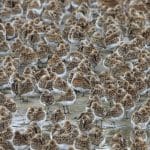 Where Freshwater Meets SaltwaterWestern sandpipers congregate in estuaries–where fresh water from rivers mixes with salt water from the ocean, supporting life adapted to this unique ecosystem. These estuaries provide critical stopovers for migrating shorebirds, connecting life around the globe. These Western sandpipers are on their way from their wintering grounds on the coasts of North and South America to the Arctic to nest and hatch their young. (Photo by Gerrit Vyn) 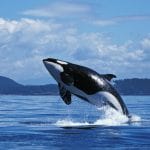 The Majesty of OrcasNothing spells “wow” quite like a killer whale. The largest member of the dolphin family, killer whales—or orcas—include distinct populations with vastly different eating habits. Transient orcas hunt marine mammals like seals and sea lions. Resident orcas subsist almost entirely on salmon–predominantly chinook salmon, the largest, fattiest species in the region. Consisting of three separate pods—J, K, and L—the southern resident orcas live in Puget Sound but their population is dwindling. Several calves from these pods have died in recent years, most famously a calf that lived less than an hour in the summer of 2018. Her mother, Tahlequah, then carried the dead calf for more than two weeks and one thousand miles throughout the Salish Sea. (Photo by Brandon Cole) 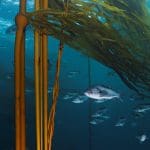 Forests Under the SeaKelp forests provide homes and cover for numerous species in our marine waters. These large seaweeds form dense canopies in intertidal and subtidal areas and can extend a hundred feet deep. They take up nutrients coming down the rivers, buffer ocean acidification, and, with the help of sunlight, grow into massive structures that feed a multitude of species, from bacteria to sea urchins. Here, a school of black rockfish swims through a bull kelp forest. (Photo by Brandon Cole) 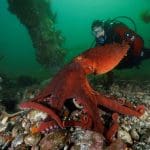 Giant Pacific Octopus Says HelloThe largest octopus species in the world, the giant Pacific octopus found in Puget Sound sports eight arms with a radial span of up to twenty feet and commonly weighs between fifty and one hundred pounds. It feeds on shrimp, crabs, clams, snails, fish, and even its own kind. These amazing creatures can also change the texture of their skin to camouflage themselves. (Photo by Brandon Cole)