Thousands of streams, from the smallest rivulets to the mighty rivers, feed Puget Sound. King County’s environmental program explains the importance of rivers and streams in this way: “Many of our Pacific salmon and trout species are anadromous—meaning they are born in our streams, they migrate to the ocean to feed and grow into mature adults, and then they return to their natal stream to spawn. These fish, therefore, are both freshwater and marine species, depending on the time of year.”

The return of these seagoing fish to their natal waters is a sight to behold. In countless places around the Sound, visitors can walk to the water’s edge and watch the mighty fish as they work their way up their native streams to a gravelly place where the female will deposit their unfertilized eggs and the males will deposit their sperm.

More than a century and a half of dam building and road construction has blocked fish passage up and down numerous streams. Meanwhile, 80 percent of tidal marshes and river estuaries in the Sound were diked and drained to take advantage of the rich agricultural soils and flats, easily developed terrain. 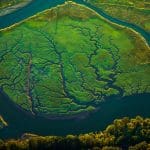 The Veins and Arteries of Puget SoundRestoring tidal marshes, such as this one at the mouth of the Nisqually River, increases habitat for salmon and other wildlife and reestablishes Puget Sound floodplains that have been altered by humans. This tidal marsh restoration project is the largest of its kind to date in the Pacific Northwest. (Photo by Art Wolfe) 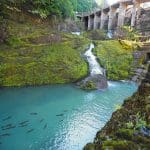 Importance of Free-Flowing WatersFor more than a century, the Elwha Dam prevented salmon from reaching their spawning grounds in the upper Elwha River. Following the dam’s removal in 2012 and the removal of the Glines Canyon Dam eight miles upstream two years later, the Elwha River is once again able to flow freely from its headwaters in the Olympic Mountains to the Strait of Juan de Fuca. Since the removal of two dams, salmon have returned and are spawning once again. (Photo by Steve Ringman/The Seattle Times) 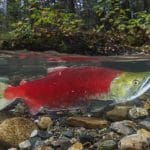 Journey of a Thousand MilesAfter traveling thousands of miles across the Pacific Ocean, this male sockeye is headed upstream to its spawning grounds. The return of salmon to their natal waters is a sight to behold. In countless places around the Sound, visitors can walk to the water’s edge and watch these mighty fish as they work their way up their native streams to gravel beds where the females deposit their unfertilized eggs and the males deposit their sperm. (Photo by Brandon Cole) 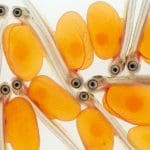 From Freshwater to Ocean and BackAfter living for many years at sea, salmon travel long distances to spawn in the rivers and streams where they were born. After they hatch, the tiny salmon—called alevin at this stage—absorb nutrients from the enormous yolk sacs attached to their bellies. (Photo by Amy Gulick)