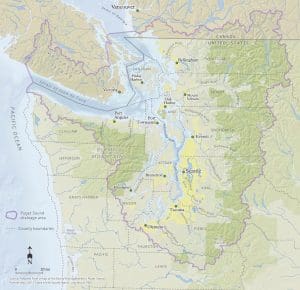 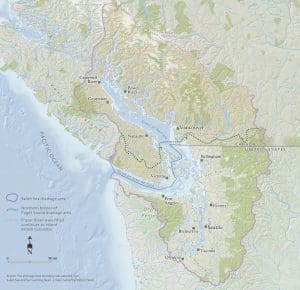 PUGET SOUND AND THE SALISH SEA: A COMPLEX WATERSHED AND TRADITIONAL HOMELANDS

The waters of Puget Sound are fed by an intricate web of thousands of rivers and streams, originating deep in the surrounding mountains and forests. With 2,500 miles of coastline, the Puget Sound is bordered by the Strait of Georgia to the north and the Strait of Juan de Fuca to the northwest. It forms the southern portion of the broader Salish Sea ecosystem, home to a Canadian province, a US state, and fifty-plus Native American Tribes and First Nations.

For thousands of years, indigenous peoples have lived throughout the greater Salish Sea region. Coast Salish tribes developed a rich culture and had established hundreds of seasonal camps and permanent villages before Europeans arrived in tall ships in the late 1700s and profoundly disrupted and changed their lives.

Today we recognize that the Salish Sea region constitutes the traditional and present-day homelands of many Indigenous Peoples and Tribal Nations. We acknowledge the vast, collective knowledge of these peoples and are grateful for their ancestral and current stewardship of these lands.