Thomas Scofield Handforth (September 16, 1897 – October 19, 1948) was an artist, writer, and illustrator from Tacoma, Washington. He is best known for his children's book Mei Li, which won the 1939 Caldecott Medal for illustration.

Handforth’s body of work is diverse and ranges from sketches, etchings, pastels, lithographs, oil painting, watercolor, charcoal as well as written works in the form of books, letters, etc. 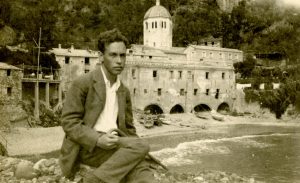 The pieces in Tacoma Public Library’s collection span his entire career. The collection contains early etchings and anatomical drawings created while he was enlisted in the US Army in 1918, and while traveling to France, Italy, Hungary, England, Tunisia, and China. The collection also includes drafts, mockups, and concept art for his book illustrations and other design projects.

The Thomas Handforth Image Archive provides a glimpse into the work of an artist, traveler, author, and illustrator and features many works that few have seen before.

A Brief Timeline of His Life

Enlisted in the United States Army June 25, 1918 where he did anatomical drawings in Washington D.C.

Traveled and studied in France, Italy, Austria, Hungary, England and Tunisia from 1921 to 1926.

Lived and worked in Morocco in 1928-1929 where he illustrated his first book Toutou in Bondage which had been written by Elizabeth Coatsworth.

Worked in Mexico in 1930 where he composed illustrations for Tranquilina's Paradise. While there he received news that he had been awarded a 1931 Guggenheim Fellowship for travel and graphic work in Asia.

He spent 1939 in New York and San Francisco. On June 20, 1939 he attended the annual conference of the American Library Association in San Francisco where he received the prestigious Caldecott Medal, which was awarded for his children’s book Mei Li.

In 1943 he spent eight months at the Seeman School for mentally challenged boys  where he experimented with the teaching of art to the handicapped.