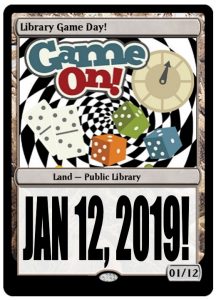 You are cordially invited to the debut of the Board Game Collection at the Swasey Branch of Tacoma Public Library on January 12th from 1:00 pm to 5:30 pm.

If everything you know about Board Games starts with “Candy Land” and ends with “Monopoly”, you are in for a surprise!

Board game sales have skyrocketed and more people than ever before are playing board games! In just the last few years a variety of games have become bona fide hits. For example:

For the Swasey Board Game Collection Debut on January 12th we will have some special guests bringing their collection of introductory decks to teach you how to play “Magic: The Gathering” and the “Pokemon Card Game”. When you are finished learning the games, you can take a deck of cards home and play some more!

BRING YOUR CAMERA! – Have your picture taken with Renowned Pokemon Authority: Professor Conner!

Beginning on January 15th the Swasey Board Game Collection will be available for check-out and use inside the library only.

We will have games in our collection available to play, or learn to play for all ages and interests!