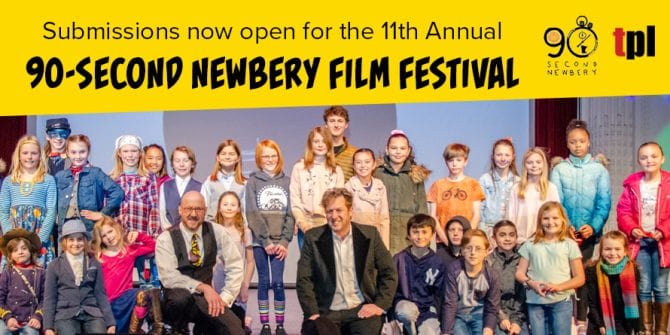 The 90-Second Newbery Film Festival—an annual celebration of kids’ and teens’ creativity in which young filmmakers create short movies telling the entire stories of Newbery Medal and Newbery Honor books in roughly 90 seconds—is now open for submissions for its eleventh year. The deadline for entries is February 25, 2022.

The film festival was founded by author James Kennedy (Dare to Know, The Order of Odd-Fish) and screens every year to packed houses at libraries and theaters in New York, Chicago, San Francisco, Boston, and right here in TACOMA (organized by Tacoma Public Library).

Ever since 1922, the American Library Association’s Newbery Medal has been recognized as the most prestigious award in children’s literature. 2022 marks the 100th year anniversary of the award. Standout honorees of the Newbery Medal include Madeleine L’Engle’s A Wrinkle in Time, Louis Sachar’s Holes, and Katherine Paterson’s Bridge to Terabithia. But according to Kennedy, “It turns out that any book, no matter how worthy and somber, becomes hilarious when it’s compressed to only 90 seconds.”

For the past ten years, the best 90-Second Newbery movies have been shown at special-event screenings at venues such as the New York Public Library, San Francisco Public Library, Chicago Public Library—and in Tacoma, at the Rialto Theater and the Blue Mouse Theater, co-hosted by Kennedy and Tacoma’s own Doug Mackey.

The Tacoma screening will be March 19, 2022. Location TBA. More details may be found at www.90secondnewbery.com, opens a new window. The website features many of the videos received throughout the last ten years, as well as further resources for teachers and filmmakers. To receive more information, or to arrange a presentation, interview, or virtual workshop with James Kennedy or Tacoma Public Library staff, email Tacoma Public Library at sholloway@tacomalibrary.org.