One man’s trash is another man’s treasure

The cereal world of Michael Albert 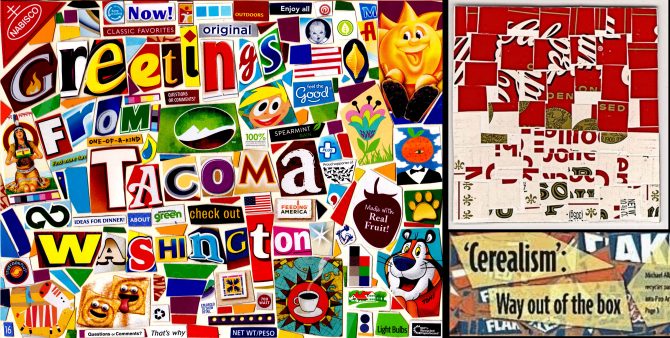 While most of us casually toss empty boxes of cereal, tea, or macaroni in the recycling bin, New York artist Michael Albert carefully collects these discarded materials and repurposes them into meticulously crafted text based collages. Pop art, popcorn and pop tarts merge into a style that has the loose form of graffiti, a personal style which Michael has christened ‘cerealism.’

Over the past several years he has been creating large scale "Epic Works" collages on various themes including historical, biblical, literary, musical, botanical, mathematical & geographical, including “The Number Pi,” written to 777 digits which took 4 years to create by hand.

Michael will be holding a three week series of workshops throughout the Pacific Northwest including three at Tacoma Library. His work will be exhibited in the Main Branch’s Handforth Gallery from June 15 through July 30. Meet him at the artist reception and gallery talk on July 30th at 1:30 PM at the Main Branch. Better yet, sign up for one of his workshops. His energy and enthusiasm are contagious.

Space is limited and registration is required.