Janet Marcavage is an Associate Professor of Art at the University of Puget Sound, teaching studio courses incorporating a range of print media such as lithography, etching, relief, and intaglio, plus experimental, photo-mechanical and digitally-augmented methods. "Textile patterns, particularly line and gingham patterns, have consumed my work in recent years," she explains.  Marcavage is interested in the topography and movement of pattern, as well as the way in which patterns shift meaning based on the form in which they take, such as the form of a table, girl, man or laundry pile. "I appreciate the vulnerability of folds on fabric in the movement of everyday life – a simple movement of fabric changes its undulating appearance. The lines in my work gather, crease, rumple, change track, and repeat themselves."

Most of the work featured in the Handforth Gallery resulted from a 2015-16 Tacoma Artists Initiative Project (TAIP) grant from the City of Tacoma, which allowed the artist to incorporate intaglio techniques into her screen printing work.

Marcavage has been working with Baldwin Intaglio Ground (BIG) and Aquatint intaglio processes which allow her to achieve different line weights and values.

Intaglio lines and tones are delicate and more nuanced. Intaglio printmaking is a great deal more time-consuming than screenprinting. “I experimented with using both contour and cross-contour lines to render textiles.  I also combined intaglio with screenprint in order to highlight their unique effects."

The exhibition continues through December 31. 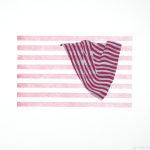 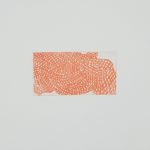 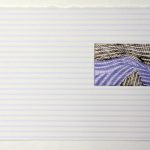