The 2017 edition of the 90-Second Newbery Film Festival was a blast!  The 90-Second Newbery Film Festival is a filmmaking contest in which kids and teens make short (often hilarious) films about Newbery Award winning children’s books. The completed films are shown on a big screen at the Main Branch of Tacoma Public Library after an Oscar-style stage show, and a selection of the best films are featured nationwide. On Saturday, February 12, 2017, 200 attendees came to celebrate the local youth filmmakers. The audience enjoyed a fantastic performance by local actor Doug Mackey, James Kennedy, author of Order of the Odd Fish, and Keir Graff, author of The Matchstick Castle, in addition to watching the films themselves.

After the show Keir Graff and James Kennedy signed copies of their books and schmoozed with a crowd of adoring fans.

Learn about the library’s Digital Media lab that provides hardware, software, and instructional support for filmmakers of all ages 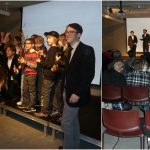 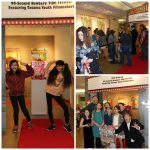 PicMonkey_CollageThe young stars, their mentors, and audience members enjoyed walking down the red carpet and posing for photos. 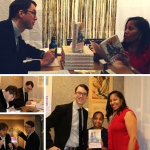 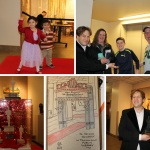