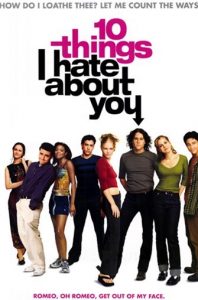 Looking for ways to feel old? March 2019 marks the 20th anniversary of 10 Things I Hate About You. Filmed locally in and around Puget Sound, Tacoma’s landmark Stadium High School features prominently. The popular teenager romcom features a noteworthy “before they were great” cast whose careers continued to grow and, in one notable case, ended too soon: Julia Stiles, Heath Ledger, who died in 2008, Joseph Gordon-Leavitt, and a pre-The West Wing Allison Janney. Based (somewhat) on Shakespeare’s The Taming of the Shrew, the film remains popular and fun. It’s not too cringeworthy for an aging teen comedy (looking at you John Hughes).

So, check out a copy of the DVD today. To paraphrase Kat’s English Lit take on Sonnet 141:

I hate the way years move past us and show off our silly hair,

I hate the way aging makes you miss common stuff we share.

I hate your silly teen comedy and how it shows its time.

I hate being old so much and how Stadium thwarts this rhyme.

I hate how this nostalgia feels, I hate how young Heath died.

I hate it how those days have come and gone, how those years did fall,

But mostly I hate the way I don’t hate 10 Things, not even close, not even a little bit, not even at all.