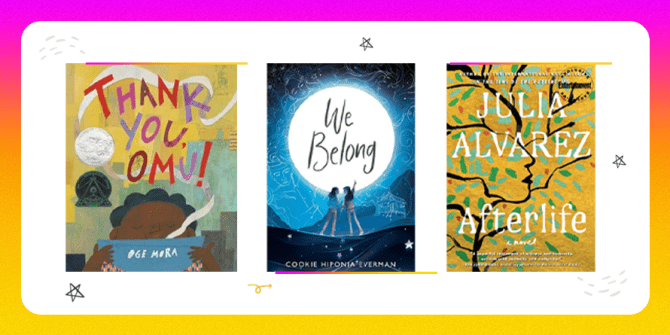 Tacoma Reads is a city-wide reading program that seeks to unite the community in dialogue around contemporary themes through reading a common text. A longstanding partnership between the City of Tacoma’s Mayor’s Office and the Tacoma Public Library, with wide community support and collaboration.

Tacoma Reads 2022 will focus on the themes of hope, resilience, and community through three books, one for each reading level:

Antonia Vega, the immigrant writer at the center of Afterlife, has had the rug pulled out from under her. She has just retired from the college where she taught English when her beloved husband, Sam, suddenly dies. And then more jolts: her bighearted but unstable sister disappears, and Antonia returns home one evening to find a pregnant, undocumented teenager on her doorstep. Antonia has always sought direction in the literature she loves—lines from her favorite authors play in her head like a soundtrack—but now she finds that the world demands more of her than words.

Afterlife is a compact, nimble, and sharply droll novel. Set in this political moment of tribalism and distrust, it asks: What do we owe those in crisis in our families, including—maybe especially—members of our human family? How do we live in a broken world without losing faith in one another or ourselves? And how do we stay true to those glorious souls we have lost?

Use your Tacoma Public Library card to check out a physical book, download an eBook, or listen to the Audiobook of “Afterlife.”

Born in New York City in 1950, Julia Alvarez's parents returned to their native country, Dominican Republic, shortly after her birth.  Ten years later, the family was forced to flee to the United States because of her father’s involvement in a plot to overthrow the dictator, Trujillo.

Alvarez has written novels (How the García Girls Lost Their Accents, In the Time of the Butterflies, ¡Yo!, In the Name of Salomé, Saving the World, Afterlife), collections of poems (Homecoming, The Other Side/ El Otro Lado, The Woman I Kept to Myself), nonfiction (Something to Declare, Once Upon A Quinceañera, and A Wedding in Haiti), and numerous books for young readers (including the Tía Lola Stories series, Before We Were Free, finding miracles, Return to Sender and Where Do They Go?).

Alvarez’s awards include the Pura Belpré and Américas Awards for her books for young readers, the Hispanic Heritage Award, and the F. Scott Fitzgerald Award.  In 2013, she received the National Medal of Arts from President Obama.

Please save the date for Tacoma Reads: A Conversation with Julia Alvarez hosted by Mayor Woodards on Saturday, Nov. 5, 2022.

Stella and Luna know that their mama, Elsie, came from the Philippines when she was a child, but they don't know much else. So one night they ask her to tell them her story. As they get ready for bed, their mama spins two tales: that of her youth as a strong-willed middle child and immigrant; and that of the young life of Mayari, the mythical daughter of a god. Both are tales of sisterhood and motherhood, and of the difficult experience of trying to fit into a new culture, and having to fight for a home and acceptance. Glorious and layered, this is a portrait of family and strength for the ages.

Cookie Hiponia was born in the Philippines and immigrated to America when she was nine years old. As the mother of children born into two cultures, Cookie had spent years searching for books that reflect her family’s experience. When she couldn’t find such a book, she heeded Toni Morrison and wrote the book she wanted to read with her daughters. We Belong is that book, a semi-autobiographical middle grade novel-in-verse about the Pilipino American immigrant experience that weaves in Tagalog cosmic mythology. Cookie lives in Seattle with her family.

Check out We Belong, opens a new window from Tacoma Public Library.

Thank You, Omu! By Oge Mora

When the aroma of Omu's homemade stew fills the air, her neighbors arrive, one by one, for a taste until all is gone except for her generous spirit.

Oge Mora graduated from the Rhode Island School of Design with a BFA in illustration. When not painting in her studio, Oge is in the kitchen cooking her late grandmother's recipes. Her first picture book, Thank You, Omu!, was a Caldecott Honor, a New York Times Notable Book and Editors' Choice, and a Junior Library Guild selection. She lives in Providence, Rhode Island, and invites you to visit her website at www.ogemora.com.

Check out Thank You, Omu!, opens a new window from Tacoma Public Library.