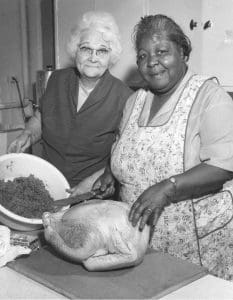 Mrs. Pearl Croft (left) and Mrs. Georgia Clayton prepared the turkey with dressing dinners that were served at the annual Autumn Dinner Festival on November 8, 1968 at the Senior Center at 923 No. 13th Street. All Pierce County senior residents over the age of 55 were invited. Mrs. Clayton, the chef at the center, was assisted by Mrs. Croft, the widow of former Sheriff, Lee Croft. Senior Centers, including two in Tacoma, were being established in the late 1960's to offer activities for the older population. The Tacoma centers were on No. 13th St. and at Wright Park.