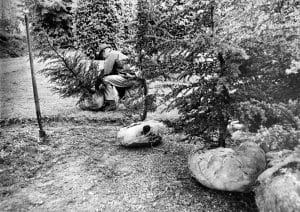 John MacDougall was pictured above on November 12, 1972, balling and burlaping Christmas trees on his tiny Tacoma Living Yule Trees farm. His stock included many rare and exotic living Yule trees such as Cortorta Pine and Spanish fir and also beautiful specimens of common varieties such as pine and Douglas fir. The MacDougall family had lived on their hilltop farm since 1947 and had brought in many trees, some of which were already five years old. Those were among the tallest there, measuring 15 feet or more. Most of the trees were native to the Pacific Northwest but many not well known to the general public. The living Christmas tree had become popular only since about 1962 and could be purchased at Poole's Garden Center, among other locations.