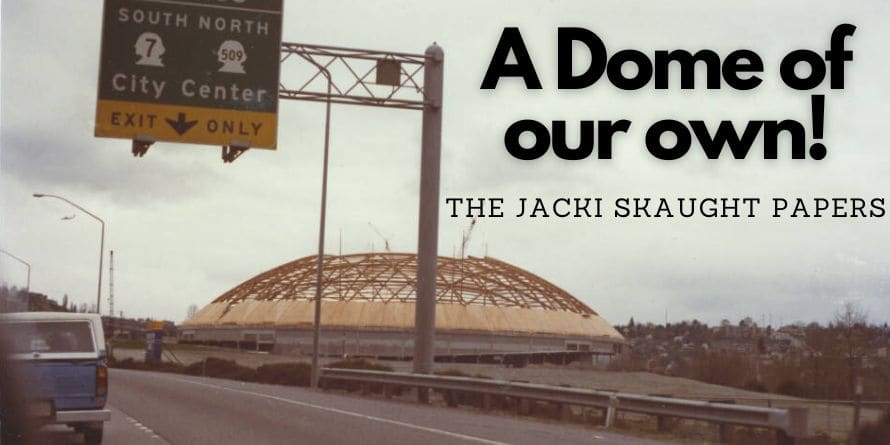 Jacki Skaught, the donor of this collection, has had a strong background in city development and government. She was a member of the League of Women’s Voters and held positions on the Tacoma City Council. As such, she had worked closely with city management. She joined the Jury of Recommendations that was officially created by the city council to help make decisions in every aspect of the planning and design phases of the yet-to-be-built Tacoma Dome. The jury worked diligently to create a plan for selecting the site, choosing the design and functions of the building, requesting construction proposals, developing timetables, and interviewing construction team applicants. Her involvement helped shape the design of the Tacoma Dome we know today.

In 1979, the City of Tacoma voted overwhelmingly in favor of a bond issue to build a sports and convention center, originally conceived of as a “Mini Dome.” The city decided to apply a “Design-Build/ no bid” process for selecting architects and contractors. This was such a unique process at the time that Washington State legislation had to be altered in order to allow it to proceed. The central concept of the Design-Build process is that project initiators have a set monetary figure in mind and will only accept a favorable proposal from a design team willing to work within these parameters. A Jury of Recommendations was officially created by the city council to help make decisions in every aspect of the planning and designing phases of the building. This team consisted of seven members representing expertise in building management, construction, downtown area business, architecture, athletics, education, and the interests of the citizens of Tacoma.

For three years, the Jury worked diligently creating a plan for selecting the site, choosing the design and functions of the building, requesting construction proposals, developing timetables, and interviewing construction team applicants. Part of the Jury’s work involved travelling to other cities to view structures similar to the designs they had envisioned. Although it was not the jury’s role to make any authoritative decisions themselves, the well-researched proposals they presented before the mayor and City Council were the guiding factors that shaped the design of the Tacoma Dome we know today.

The Tacoma Dome opened to the public April 21, 1983. A VIP Grand Opening Gala was held the evening before, and the ribbon cutting was the next day, followed by three days of festivities planned by Jacki and the other Jury members. Although the jury’s work was officially done following the acceptance of the proposal, they continued to work together throughout the building construction, selection of vendors and sports teams, and other pre-opening activities. Jacki was actively involved in planning the opening week festivities, selecting the first manager of the Dome, and is credited with shooting the first basket on the basketball court. The jury was never officially dismissed, but they were officially reconvened briefly in 1985 to review issues related to the Dome after two years of operations. The jury informally disbanded after 1985, although individual members, such as Jacki, continued to participate in Dome related events and issues. For example, Jacki oversaw the planning of the 10 and 20 year Dome anniversary celebrations and helped lobby for a 2005 bond issue for Dome improvements, which failed. Following her official work on the Jury, Jacki has remained active in Tacoma Dome events and has held other positions with the city of Tacoma. She served as an Economic Development Specialist, concentrating on tourism, business recruitment and retention, marketing, special events and international trade relations. She also was employed as a city film commissioner, promoting the Tacoma area for film companies.

Jacki's papers cover the years 1980-2005 and include meeting notes, correspondence, research reports, and other Dome-related ephemera. Two pieces of the collection we would like to draw your attention to are two videos we recently digitized. Take a look!