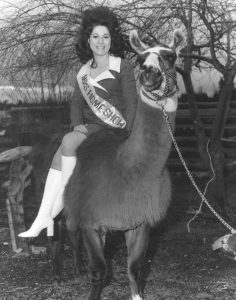 In March of 1972 Elaine Burt, the newly crowned Tacoma Home Show Queen, smiled prettily while perched on the back of a llama. Her placid companion, who also appears to be smiling, was on display during the 26th edition of the home show held at the University of Puget Sound Fieldhouse from March 28 through April 4, 1972. Llamas were just being introduced to the Pierce County area, within a few years they could be seen at the Puyallup Fair.