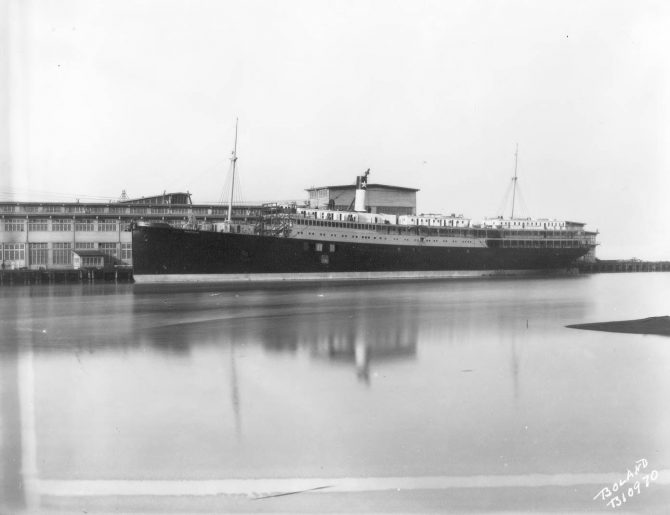 The Bienville at finishing dock of Todd Drydock. Once completed, she will have two stacks - one is in position now. The SS Bienville was launched at Todd Drydock & Construction (Shipyards) in Tacoma on July 16, 1924, less than five months after her keel was laid. She was built for the Atlantic Steamship lines of Southern Pacific. The combination freight and passenger vessel, 445 feet in length, had accommodations for 236 first class passengers and 110 third class passengers. The ship was sponsored by Dorothy Maxson, daughter of Capt. and Mrs. C.P. Maxson; Maxson was the commodore of Southern Pacific lines and would be the ship's master. The Bienville was expected to be delivered to Southern Pacific's New York location on December 7, 1924. She was the 38th big ship built in Todd yards since the shipyard's 1917 establishment. During the war era of 1917-20, Todd built 32 steel freight vessels for the U.S. Shipping Board.