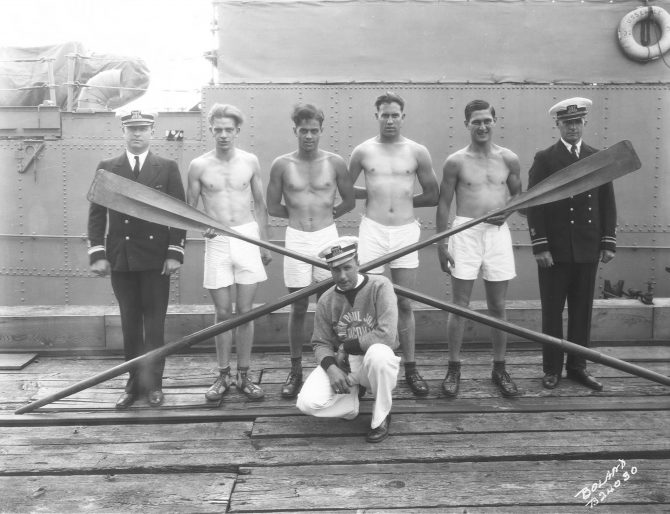 Four bare chested Sea Scouts are flanked by two Sea Scout leaders in uniform as they posed behind giant oars on August 17, 1931.Tacoma's Sea Scouts were led by Dr. Hubert Watson who is believed to be the man with the John Paul Jones Tacoma sweater kneeling above. Dr. Watson was the "skipper" of the John Paul Jones, Ship 120. In 1930 Tacoma's Sea Scouts participated in the Seattle-Prince Rupert, B.C., international cruiser race aboard the 40-foot admiral's barge, the "Triton" a 60 hp. remodeled Navy boat, an event in which they won honors. This photograph was probably taken because Ship 120 was selected in 1931 to be the Pacific Northwest Sea Scout flagship.This was the first Tacoma ship to be honored since Sea Scouting was added to the Boy Scout program in the Northwest. Dr. Watson, a prominent Tacoma dentist, was still nominal commander of the John Paul Jones at the time of his death at age 31 in October of 1932.