Richards Studio was a Tacoma-based photography business operating between 1917 and 1980. In their time they were widely considered the premier commercial studio in the South Sound region. In 1989 the Tacoma Public Library acquired their photographic collection and through the early 1990s digitized large parts of the collection to make them available free online. This digitization effort concentrated on making available the widest selection of the various types of images Richards studio created throughout its existence. 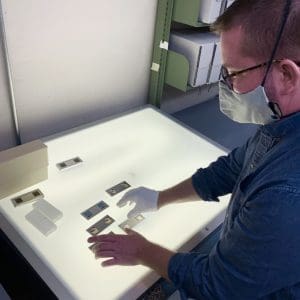 local businesses, city government contracts, and formal portraiture. This commercial point of view of the studio meant their output excluded much visual representation of underrepresented and underserved communities. However, this doesn’t mean that within this type of commercial content there is no trace of a visual representation of underserved communities, it is just more difficult to find.

From September 2020 through January 2021 Andrew Weymouth, the Northwest Room's Visual Resources Association Foundation (VRAF) intern, focused his project on uncovering photographs from the Richards Studio Collection that reveal the cultural diversity of the South Puget Sound area. Uncovering this specific content was by no means easy. Andrew used tools such as data visualizations and analyzing exported collection information to isolate sections of the collection to give him clues about where to find images that include this particular content. During his process of assessing material from the collection, he was able to locate an astonishing number of images in unlikely areas of the collection.

One of these areas was in a collection of stereo color transparencies (3D slides). These transparencies documented everything from public events, portraits, businesses, to candid images of 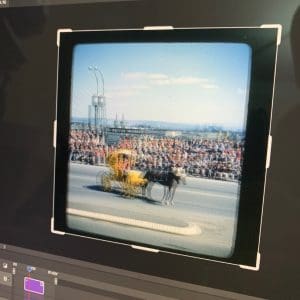 women’s groups and ethnic organizations. Andrew not only arranged and described these stereo images but digitized and edited each image with software to recreate the 3D effect in a GIF file.

At the completion of his project, Andrew digitized over 250 images in four unique photographic formats. I sat down with him to ask him some questions on his project,

The huge volume and time span of the collection had incredible potential. I was also interested in the collection because there is some level of objectivity in commercial photography, as opposed to journalistic or artistic work, where creative or editorial choices sometimes influence who is documented and how they are portrayed. While being able to afford a photograph has its own complex social implications, if you had the money, the Richards Studio seemed very happy to accommodate, regardless of your background or interests.

I come from a design background and my most recent experience was creating data visualizations for text repositories, so I created some tools to help me wrap my head around the breadth of the collection. This included making a visualization of the items which had already been digitized and clustering them by decade and the studio's internal identification system. I also created a visualization of the BIPOC representation in the digitized materials to make similar notes and also track my progress in fulfilling the mission statement of the grant. Finally, after having difficulty uncovering information-rich photographs, I realized that identifying and visualizing the gaps in the digitized records would be a much more efficient way to survey the collection.

Out of all the material I found, I am the most excited to share the panorama and Kodachrome stereo transparency materials. The Richards Studio used the panorama format almost exclusively for group photos and they are an incredible glimpse into the fraternal organizations, women's clubs, and laborers that shaped Tacoma over the last century. The quality of the panorama film is excellent as well, which provides revealing detail into architecture, clothing, and environmental conditions.

The stereo transparencies were also very surprising! I knew the format but associated it with very early photography (likely from following @steroscopichistory on Instagram), it was great to achieve the same effect with that truly eye-popping tone of saturated Kodachrome. It's a perfect format for documenting the dynamic yellows and reds of the 1950s Daffodil Parade, one of the standouts of the project.

The two most prominent themes I came away with are community and resilience. Perhaps it's my 2022 vantage point, but I found the group portraits of tens and sometimes hundreds of people, aligned in interests and beliefs, very affecting and also very absent in modern life. This highlights one aspect of archiving and preservation that I feel is so important. The hum of the present can move so subtly that things can appear unchanging. These historic images can contrast our current condition in sharp relief.

Finally, the Japanese American wedding series align most closely to the material I hoped to promote at the outset of this grant project. In contrast to other items relating to WWII incarceration, these photos are documenting a culture independent from the context of struggle and racism. The formal dress, ornamental arrangements, and social ceremonies provide a unique insight into a resilient culture still thriving in the Pacific Northwest.