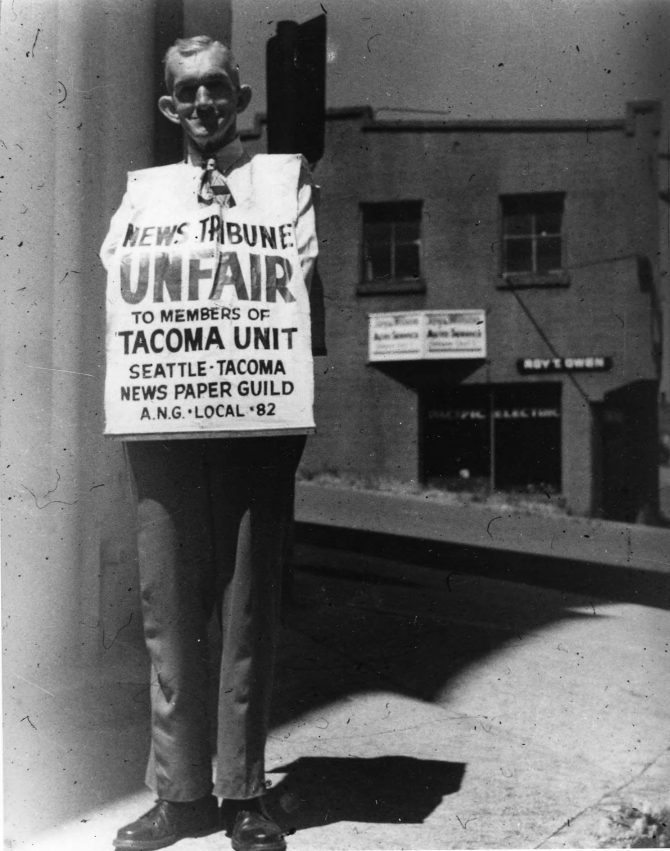 In mid-June of 1952, the Pacific Northwest Newspaper Guild, representing the Seattle and Tacoma newspaper reporters, advertising and circulation representatives, and photographers, went on strike against the Tacoma News Tribune over wages. Union pickets, such as Herman F. Hunt (pictured), appeared outside the newspaper's headquarters. The paper's other unions, including the Pressmen, Typographical, Mailers, Stereotypers and Teamsters refused to cross the picket lines. The newspaper closed operations. During this interim, the strikers published a tabloid sized daily newspaper called the "Tacoma Reporter." It was published on a flatbed press at the Labor Temple on Fifteenth and Market. As more advertisers began to run their ads in the Reporter, the owners of the News Tribune, the Baker family, relented. On August 24, they signed a contract with the Guild that included higher wages. Herman F. Hunt, who came to Tacoma in 1902, was a Police Reporter for the Tacoma News Tribune from 1922 till his retirement in 1967. He was the son of Henry F. Hunt, the namesake for Hunt Jr. High. Herman Hunt died February 3, 1989 at the age of 87.