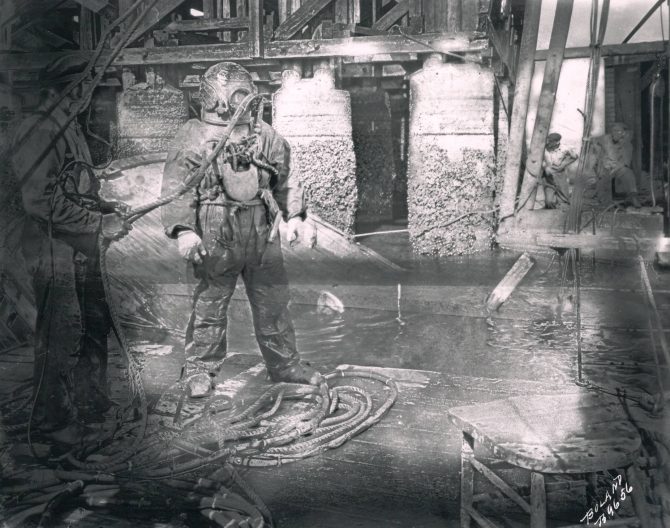 Diver Walter McCray prepares to resume the raising of the "Rubaiyat." After several unsuccessful attempts, raising of the sunken freighter "Rubaiyat" was once more underway in March of 1924. The ship had sunk the previous September when she capsized on an outbound journey from Commencement Bay. Diver Walter McCray and Foss Launch & Tug had tried before to haul the ship from the deep bay waters but she had become tangled with the sunken piling from the old 11th St. Bridge. Efforts to raise the ship were futile as cables slipped from the hull and the ship sank back into 378 feet of water. Attempts halted at the end of November, 1923, until the following March. Drawing the attention of many interested Tacomans, the recovery process finally culminated in the raising of the freighter, beaching her, and later successfully floating her to the Western Boat plant on the Wapato Waterway on March 25, 1924. Diver McCray and Fred Berg of Foss Launch & Tug had received title to the wreckage and were prepared to sell her "as is." They were instrumental in completing the deepest salvaging operation to date carried out on the Pacific Coast with the lifting of the "Rubaiyat" from depths of nearly 380 feet with 140 tons of freight aboard.