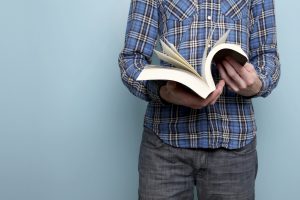 November 13-19 is National Bible Week. It was first celebrated November 8-14, 1941, shortly after Pearl Harbor had been bombed. Tacoma Public Library has books for further reading and understanding of this historic text.

How to Read the Bible

For many people, the Bible lies at the heart of their faith, an ageless source of inspiration and guidance. Drawing on some of the commonly used modes of biblical scholarship, such as archaeology, cultural studies, and literary criticism, Cox opens up a rich, diverse, and contemporary version of scripture, one that wrestles with modern issues for fuller understanding.

Women of the Word

Whether you're young or old, married or single, this accessible volume will energize and equip you for Bible study aimed at transforming both the heart and mind.

How the Bible Became Holy

In this sweeping narrative, Michael Satlow tells the fascinating story of how an ancient collection of obscure Israelite writings became the founding texts of both Judaism and Christianity, considered holy by followers of each faith.

The Eerdmans Companion to the Bible

Whether readers find the Bible familiar or foreign, they will appreciate the Companion’s informative articles and its commentary on all of the Old and New Testament books.

The Book of the People

A renowned historian, biographer, and novelist provides a deeply personal, literary, and historical exploration of the Bible.