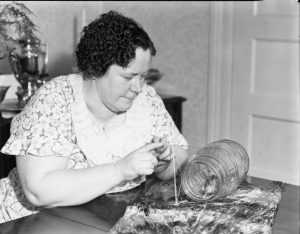 On March 3, 1937, the front page of the Tacoma Times was graced with this photograph of Lydia (Mrs. Fred) Hillert and Tacoma's newest operatic starlet, Filberta, her singing mouse. Mrs. Hillert had discovered the mouse in the shed behind her house at 1616 E. 32nd Street and first attributed the song to a bird. After several more sightings, Mrs. Hillert gathered her courage and told her husband and daughter about her discovery. In order to prove her sanity, she trapped the singer in a bag of filberts, hence the name, and enclosed her in a glass house, where she sings the family to sleep nearly every night. According to Mrs. Hillert, Filberta's rich contralto sounds much like a canary; but the picky prima donna only hummed lightly under her breath for the Times reporter.