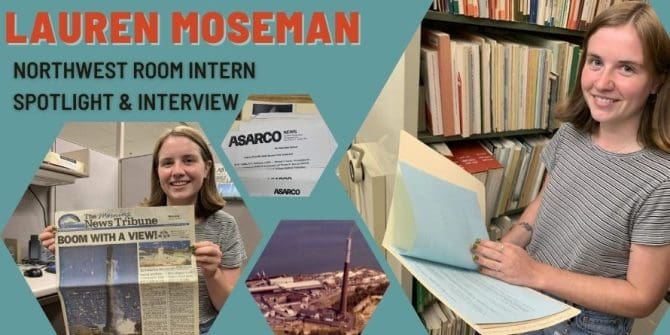 Lauren Moseman (she/her) is a rising senior at the University of Puget Sound. She is a double major in History and Environmental Policy & Decision Making with a minor in English. At school, she works for the History and Religion Departments and is a trip leader for the Puget Sound Outdoors Program. In her free time, she enjoys getting outside in any way she can, whether it be hiking or camping in the area, biking around Tacoma, or going to the beach with friends. This summer, she has been interning with the Northwest Room.

Lauren was a part of University of Puget Sound’s Summer Fellowship Internship program. This program provides a grant for students to intern at different non-profit and public sector organizations in the Tacoma area. Students share their experiences with one another through weekly community meetings and meeting with alumni.

Can you tell us about some of the projects you worked on during your internship?

During my time at TPL, I worked on two main processing projects. The first one was the American Smelting and Refining Company (ASARCO) records, opens a new window. This collection was a mix of boxes with miscellaneous papers and reports in them and lots of physical artifacts and framed pictures. One of the coolest things about this project was how many years of history were covered. While I knew a little bit about Ruston’s industrial past, there was so much I learned and that surprised me. For example, how the name Ruston itself comes from William Rust, one of the first managers of the smelter, and that Dune Peninsula Park was built on slag being dumped into the sound from the smelter. I found lots of pictures and worker documents from the 1950s all the way up to the EPA yard-cleanup project of the 1990s and into the 2000s. It was cool to see how the story of the smelter and what it meant to people emerged from the boxes. Even though the smelter stack itself is gone, the mark it left on the area is permanent, and it is exciting that these records are available to the public now.

The next processing project I worked on was the Papers of Mayor Gordon Johnston, opens a new window, who served two terms in office from 1969-1977. Going into this, I had basically no knowledge of Tacoma politics of the 1970s. 22 boxes of reports, documents, and many letters later I can pretty confidently say that is no longer true. One of the big things I learned from this project was how many regional organizations Tacoma was involved with, and the different local programs that were implemented in the 1970s. Additionally, it was especially interesting to read about how local government responded to and had to comply with federal changes. With the increase of national environmental legislation at the time, Mayor Johnston’s involvement with the Puget Sound Air Pollution Control Agency in regulating and mitigating pollution showed up a lot in his papers.

In both projects, the best part was seeing how they went from unprocessed collections to being published and searchable in the online database Northwest ORCA. It has been a really valuable experience to learn how to process and digitize records, and be a part of making Tacoma’s history more accessible this summer.

Did you come across anything you didn’t expect? Did any of the content in the collections surprise you?

Going into both of my projects, I had no idea what to expect so there were many things that surprised me and a lot that I learned through the process. That being said, I want to share a few of my favorite things I found. Something I had no idea about before the ASARCO project was how important the smelter stack demolition in 1993 was to the public. The front page of the Morning News Tribune the day after the stack demolition was one my favorite things. Additionally, I discovered a cassette recording of 7 year old Tanya Vert narrating and interviewing her family and friends on the day of the demolition for a school project, opens a new window. Her grandmother ended up sending the recording to the Smelter Plant Manager at the time, and it really showcases how important this was to Ruston residents, and for some literally changed their worldview from their front door. As I was looking through these records, some of my coworkers who lived in Tacoma at the time shared with me that they remembered that day too, and the feelings of excitement and uncertainty for what Ruston’s future would be without the stack. This was a fascinating little piece of history that was new to me and is definitely one of my favorite things I came across during my internship.

Now that you’ve completed your internship what do you hope people take away from these collections you worked on?

My hope is that people can find and learn from these collections just like I have had the privilege of doing all summer. I am really fortunate to have such inspiring and supportive professors at University of Puget Sound, and am incredibly thankful for the Northwest Room and Community Archives staff here at Tacoma Public Library who taught me about the archives. This summer I have had the opportunity to see the importance of this work in action, and look forward to utilizing Northwest ORCA and the Northwest Room for future history projects.