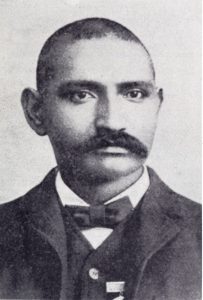 Ca.1890. John Newington Conna, wealthy real estate agent and head of the first black family in Tacoma. Born in San Augustine, Texas in 1836, Mr. Conna fought in the Civil War as part of the famed 1st Louisiana Native Guards before migrating north to Connecticut and then west to Kansas. In 1883 Mr. Conna journeyed to the "City of Destiny" Tacoma, and became a leading seller of real estate. The father of 14 children, he and Mrs. Conna donated some 40 acres of land to the City of Tacoma as a Christmas gift in 1889. He held numerous offices including president of the John Brown Republican Club and president of the Washington State Protective League. Mr. Conna was also an attorney authorized to practice before the Treasury Department. He was appointed as Asst. Sergeant At Arms for the Senate in 1889, Washington's first Territorial Legislature: he was the first black political appointee in the history of Washington Territory. Mr. Conna was also a delegate to the 1896 National Republican Convention. At the age of 64 he set up his own real estate, mines and mining property company in Alaska. He died on October 21, 1921 and is buried in Fairbanks.