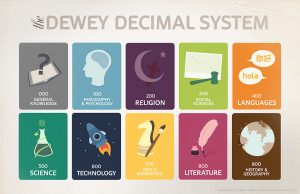 Have you wondered why the non-fiction books in the Tacoma Public Library, and in most public libraries, are arranged on the shelves the way they are? What do all those numbers on the books’ spines mean? The answers lie with a bit of nineteenth century information processing technology that was first developed by American librarian and educator Melvil Dewey, born on December 10th, 1851. Happy Dewey Decimal System Day!

The Dewey Decimal System organizes information by grouping books about the same subject together . The system uses numbers within 10 broad topic areas which can be further divided up into more specific subjects. From the general to the specific, a book’s subject is represented by a series of numbers between 000 and 999. These numbers are used to create the spine codes, known as “call numbers,” for each item.

If you want to learn more about Dewey and the system he created, check out some of these books: