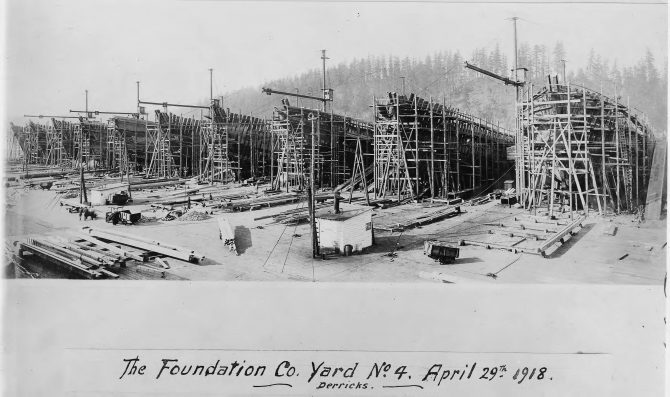 The Foundation Co. Yard #4 on April 29, 1918. By April of 1918, the Foundation shipyard, located on 50 acres in the Tideflats, was rumored to be the largest wooden shipyard in the world. The Hull Yard had 10 ways, on which they were constructing 10 five-masted wooden schooners with auxiliary steam engines for the French government. As the hulls were finished, they were launched and then towed to the fitting out yard for completion and another hull was quickly begun on the empty way. Photograph shows the company's ten Gantry derricks, total cost for derricks was $89,000. The cost for the electric hoists for the derricks was $24,800.00. The power equipment made it possible to construct the wooden ships quickly. The yard's record was one ship per week. Much of the later era wooden shipbuilding was done in the Northwest, where the prevalent Douglas Fir was used as the raw material.