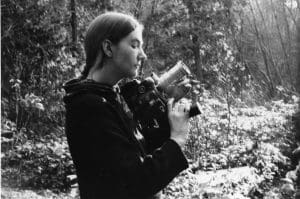 Carol Burns had just completed an hour-long documentary on Northwest Indian rights called "As Long as the Rivers Run" in 1971. The film dealt with the Indian fishing rights controversy whereby Mrs. Burns and her director/sound technician husband Robert lived with and filmed the Nisqually, Puyallup and Muckleshoot tribal members for two years. They managed this for a budget of only $10,000 and filmmaking equipment far less than Hollywood standards. The film was shown at several Northwest universities and was accepted for entry in the Peoples Film Festival International held that year in San Francisco. Mrs. Burns, an Olympia resident, graduated from Reed College in Portland with a degree in journalism and obtained her master’s degree from Stanford University in communications. In 1962 she won the national Edward P. Morgan Essay Contest as a college senior and met with leading government officials including U.N. Ambassador Adlai E. Stevenson.