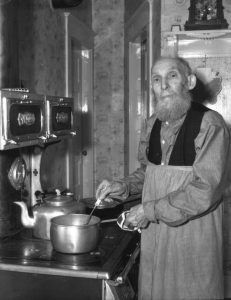 On March 1, 1939 Diores Moore rose early, donned his Sunday clothes, started a fire in the wood-burning range, put on his wife's apron, and started cooking. He wanted to surprise his wife by making a special dinner for his 94th birthday. He did not want his wife to go to any extra effort. Eleven days later, on March 12, he and his wife, Caroline, celebrated their 72nd wedding anniversary. Mr. and Mrs. Moore lived at 3423 So. Madison St.. They moved to Tacoma in 1903. Diores Moore died on March 10, 1945 at the age of 100.