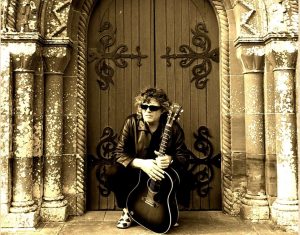 Ready for a unique and talented take on a wide range of musical traditions? Claude Bourbon is known throughout Europe and America for his amazing guitar performances that take blues, Spanish, Middle Eastern and Russian stylings into uncharted territories. Each year Bourbon plays more than 100 shows around the world, and we are delighted to once again feature him in a free performance at 7 pm on Wednesday, Jun 14, in the Main Branch’s Olympic Room. This finger-picking guitarist has performed and studied all over the world; he has crafted an unbelievable fusion of classical and jazz, with ethereal Eastern influences, Spanish and Latin elements with strains of Western folk. Claude performs solo on stage with his guitars by his side. Matched with his voice, Bourbon captures the full attention of his audience as they take in every note played off the tips of his fingers. Claude Bourbon's playing is so unique and distinct he often leaves his audience wondering how exactly he does it.

Claude Bourbon takes the different sounds heard from different regions and molds them into the songs and melodies you hear at his shows. His songs may be blues-sounding, ballads, rock, jazz or even unique and unclassifiable.