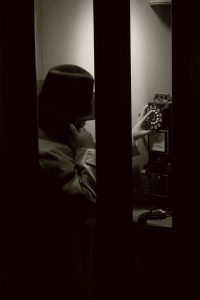 The classic whodunit, popular in the Golden Age of mystery writing (1920-1950), is a mystery where the reader is given the opportunity to engage in the same process of deduction as the protagonist throughout the investigation of a crime, following clues as they are uncovered. The whodunit is still very popular and many works by representative authors are available at Tacoma Public Library. Here are a few to get you started.

Allingham was an English writer of detective fiction set mainly in the 1920s and 1930s. Her series featuring Albert Campion is an enduring classic. Try her breakthrough, The Black Dudley Murder, published in 1929.

Carr was a master of locked room mysteries. Readers who haven’t discovered Dr. Fell and Sir Henry Merrivale, two unforgettable sleuths, could start with A Graveyard to Let or He Who Whispers

The definitive writer of Golden Age whodunits, Ellery Queen was actually two cousins writing under this well known pseudonym. The Player on the Other Side received an Edgar for best novel of 1964.

In 1990 The British Crime Writer’s Association selected Tey’s The Daughter of Time as the greatest mystery novel of all time. The mystery was part of her Inspector Alan Grant series for which she wrote six books in total.