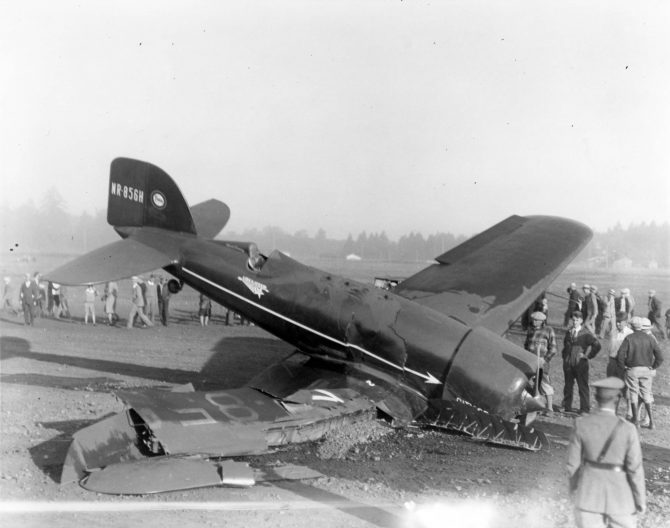 Harold Bromley's plane "City of Tacoma" after its crash. The year was 1929 and America was aviation crazy. In 1927, Lindbergh had flown solo over the Atlantic and returned to a hero's welcome. A nonstop Pacific flight was the grand prize to all ambitious pilots. Twenty eight year old Harold Bromley was backed by Tacoma money in his quest to fly from Tacoma to Tokyo. On July 28, 1929, his wooden Lockheed Vega monoplane roared down the specially constructed 100 foot wooden ramp designed to give it more lift. Its tanks had been filled early in the morning, as departure time grew nearer, the day grew warmer and the gasoline expanded. As the plane attempted to take off, the gasoline spewed back onto the windshield. As Bromley leaned to one side for a clearer view, the gasoline hit his goggles and then his eyes. The plane careened off the runway to the left and crashed, its right wing crushed and the fuselage cracked in several places. Bromley was unhurt.