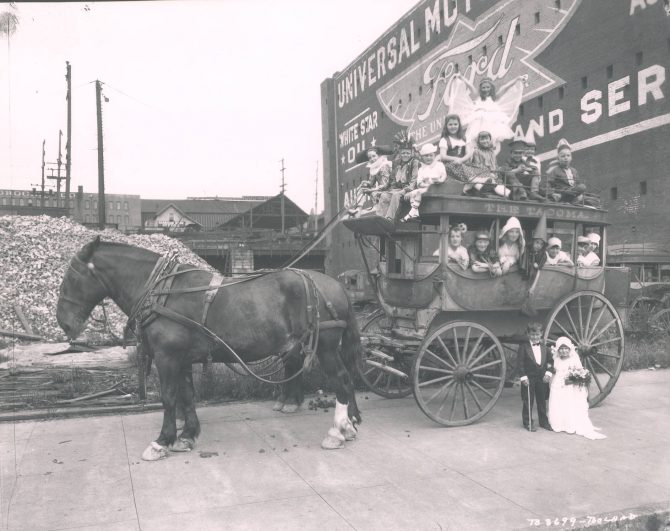 Here is the "Cinderella Coach" as it looked on July 28, 1920 when it rolled with its load of costumed kiddies through the streets of Tacoma's business district to a storytelling festival in Wright Park. The children were dressed in Fairytale costumes, including a small bride and groom. Standing on the roof of the coach dressed as Cinderella's Fairy Godmother is Sarah Elizabeth Boland, daughter of photographer Marvin D. Boland. The festival in Wright Park, planned by the Tacoma Public Library and Community Service, featured 20 of the city's best story tellers and would attract 5000 eager listeners. According to a charming story in the July 25, 1920 Tacoma Sunday Ledger, Eleanor Hoyt, the small daughter of Mrs. Elwell H. Hoyt, first saw the potential in the dilapidated Tacoma Hotel coach and envisioned it as "Cinderella's Coach." Her mother, a member of the committee planning the storytelling, put forth a plan to carry children, including Eleanor, down Broadway and over to Wright Park.