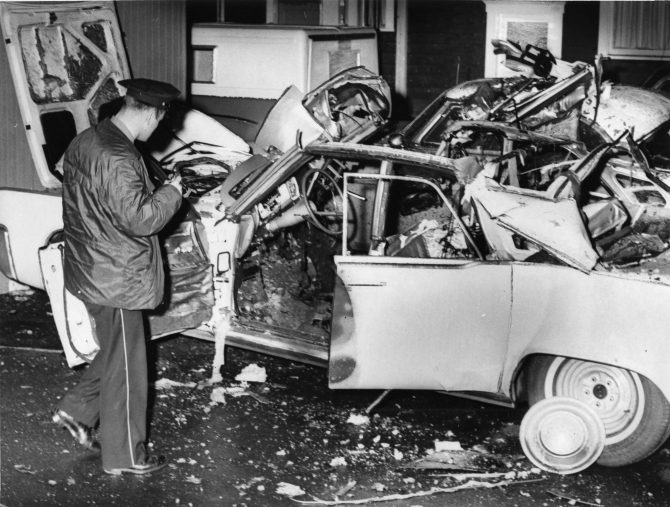 Officer Jack Burrell examines a yellow '62 Lincoln Continental owned by George A. Michaels after the parked car was shattered by a blast in the early morning hours of January 30, 1964. The vehicle was parked in the alley behind Mr. Michaels' residence at 615 N "L" St., less than 100 feet away. Besides demolishing the Lincoln, the blast caused considerable damage to a 1954 Mercury sedan parked alongside belonging to Mr. Michaels' ex-wife Vicky and virtually every home facing the alley sustained damage, including smashed windows and cut power lines. There were no reported injuries. Tacoma police stated that the blast, which had sent fragments almost 200 feet, was the equivalent of 20 sticks of dynamite. About an hour before the incident, police had surveyed the area after a neighbor had reported a youthful-looking prowler in the alley where the Michaels' car was parked. The right front door of the Lincoln was open when police arrived; after examining the car, they left to look for the prowler. Police believed that the explosives were placed on the car floor after the police departure. Mr. Michaels told police that he knew of no reason why anyone would blow up his car and knew of no one that might have had a grudge against him. According to the Seattle Times, Mr. Michaels had been arrested by King County deputy sheriffs on July 3, 1959 on a charge of illegal possession of gambling devices, mainly crooked dice. His conviction was appealed and later reversed by the State Supreme Court.