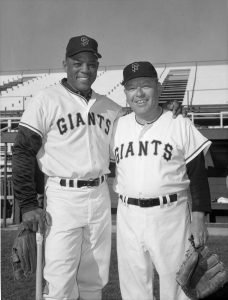 Local lumberman and philanthropist Ben Cheney in a Giants uniform, standing next to baseball star Willie Mays of the San Francisco Giants. Mr. Cheney had journeyed to Arizona in March, 1963, and was present during the Giants' spring training. He was the owner of the Tacoma Giants, minor league affiliate of the San Francisco Giants. The picture with Willie Mays may have been taken in late March, 1963, when the two teams played an exhibition game. Mr. Cheney was permitted to act as first base coach for the Big League team for a couple innings. The minor league Tacoma Giants swatted their Big Brothers 10-9 with a thrilling come-from-behind ninth inning.