May 20, 1950 was the first Armed Forces Day celebrated. It was a day in tribute to the men and women who served and Tacoma got into the swing of things with a PARADE!

Take a look at these 2 pictures from the Northwest Room’s Image Archive they were from the first parade held. 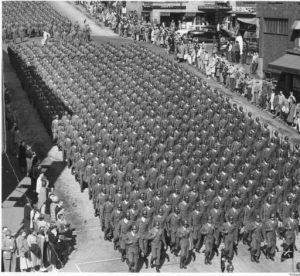 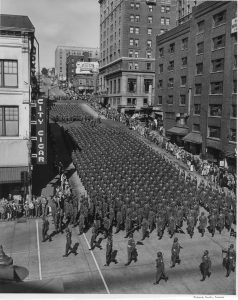 This was units of a segregated U.S. Army Troop. It was a mixed military parade made up of Air Force, Army, Marines and Navy. All together over 6000 military Personnel participated in the first parade in Tacoma the City of Destiny. 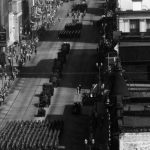 The following year saw other another parade for Tacoma’s serving men and women. Take a look down old Pacific Avenue to see the full length of the parade in early morning light. 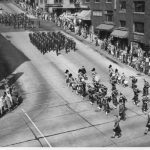 The Image Archive said this was the Seaforth Highlanders from Vancouver, B.C., Canada’s Championship pipe and drum band. They are turning the corner while two military units follow behind. Vern’s Sandwich Shop is seen on the corner. 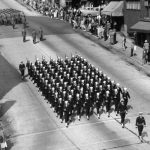 Behind these rifle swinging Naval personnel came a Flight of Air Force marching in this 1951 Armed Forces Day parade.