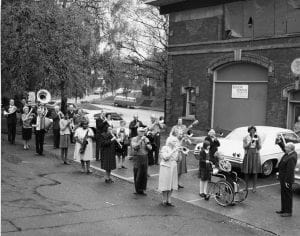 Members of the Senior Citizens Marching Band line up outside the Senior Center at 923 North 13th Street in late November, 1967, for their first rehearsal. Led by Center director Ed Apstein (at far right), they are prepared to play a variety of instruments, with brass heavily emphasized, and including an accordion. The band was sponsored by the Tacoma-Pierce County Opportunity & Development, Inc., and would eventually consist of 77 pieces. Mr. Apstein believed that it might have been the only marching band where paid up Social Security was required rather than professional union cards. Simple marching techniques would be employed and if necessary, wheelchairs provided for band members. The band had already been invited to participate in several events.