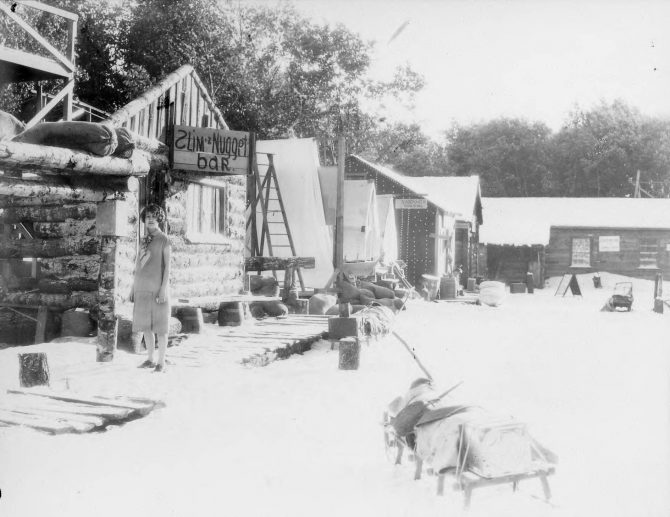 H.C. Weaver Productions, Inc., motion picture set of "Hearts and Fists", ca. 1925. Unidentified woman standing on planked sidewalk outside of "Slim's Nugget Bar;" a shoemaker's shop is further in the background. Set was still under construction as the log exteriors are basically false fronts. This Weaver Corporation's first film was set in Washington's lumber camps. The stars of the film actually arrived on May 9, 1925, with filming to begin on May 11th. Marguerite de la Motte, previously seen in "Pagan God" played the lead female role. The male cast included her husband John Bowers, Dan Mason, Jack Curtis and Alan Hale, Sr. Many of the outdoor scenes were filmed around the Kapowsin area and others in the Clear Fir Lumber Co. mill at Day Island. The film would play for a week at the Rialto in January, 1926, drawing exceptionally large audiences. At that time, a moviegoer could attend a weekday matinee for 35 cents, a evening showing for 50 cents with children's prices holding steady at 10 cents.