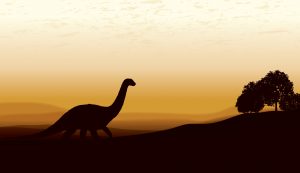 Disney Pixar’s The Good Dinosaur starts at the end. Well, not the end, exactly, because the end doesn’t happen. The movie opens with the comet that brought about the demise of the real dinosaurs, this time narrowly missing the earth. This opens an alternate history where dinos and humans could co-exist (no, not The Flintstones). Arlo, the smallest member of a pioneering apatosaurus family, must overcome his limits and fears as well as the personal tragedy that haunts him. All while facing natural perils and predators aplenty. Along the way, Arlo befriends a human boy -- whom he names Spot. Spot has problems of his own, aside from being seen as either vermin or a light snack by most dinosaurs. Together, they embark on a journey to return to Arlo's family. Basically, it’s The Land Before Time meets The Lion King meets Ansel Adam’s Yellowstone photos, all rendered on powerful 3D computers. Some scenes of peril and loss may be a bit intense for children under 7 (Bambi’s Mom / Mufasa Syndrome).