Over 100 people showed up to hear bestselling author Jamie Ford speak at the Wheelock Branch on September 15th. Jamie read a short passage from his new book "Love and Other Consolation Prizes" and answered questions from the audience.

One patron spoke passionately about how "Songs of Willow Frost" had been such an important book in his life. Another patron, almost in tears, spoke about how "Hotel on the Corner of Bitter and Sweet" had meant so much to her as a Japanese American because her parents never talked about their time in an internment camp.

Jamie remarked that since he writes so convincingly about women (and because of his name) he's been mistaken for a female writer. He credits his ability to successfully portray female characters so convincingly to his deep sense of empathy.

After the event many people stayed to have books autographed by Mr. Ford and one book club insisted on having their picture taken with him; they were so enamored with his books.

Thank you for the wonderful evening Jamie Ford. Please come back and visit us again! 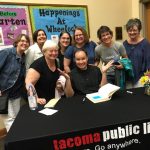 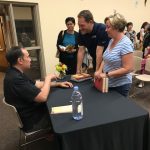 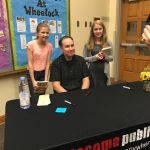 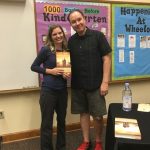 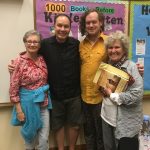 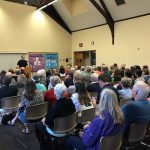