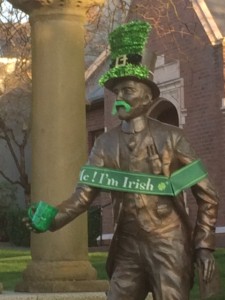 Seattle’s Fremont neighborhood has its well known Waiting for the Interurban sculpture of six figures looking to catch the next bus, which locals regularly decorate with clothing and other items to highlight current events or the turning of the seasons. Likewise, if only a little less famous, North Tacoma’s Proctor neighborhood plays host to its own playfully sartorial sculpture: The bronze Allen C. Mason statue in the Allen C. Mason Plaza on the corner of North 26th Street and Adams Street and adjacent to the Tacoma Public Library’s Wheelock Branch. The work of local artist Paul R. Michaels which was commissioned by the Proctor District Association and the Tacoma Historical Society, opens a new window, Mr. Mason always sports a jaunty top hat as he extends a welcoming hand. However, like his neighbors to the north, Mr. Mason – a developer and philanthropist who is remembered as “Tacoma’s Best Salesman”, opens a new window for his promotion of the growth of the City of Destiny in the late 19th and early 20th centuries – also occasionally dons clothes and other paraphernalia with the help of Proctor’s whimsical residents looking to reflect and celebrate the changing times.

For example, on St. Patrick’s Day, he might don a bit of the green. Around Christmas, a bit of the red. New Year’s might find him hoisting a glass of bubbly, while on July 4th he shows his patriotism with a small US flag. The Wheelock Branch staff keeps an eye out for Mr. Mason’s changes and looks forward to sharing them with our users.

If you want to learn more about Allen C. Mason and his legacy, be sure to visit the Library’s Northwest Room in person or online. You might also want to check out some of the following books to read more about Mr. Mason and how he helped to build, promote and grow Tacoma.